Steve Chalke – and another Gospel

I met Steve Chalke some years ago at an Evangelical Alliance conference. He was the best speaker on the platform and struck me as very sincere. And there’s the rub.
He was sincerely wrong.

Q: How dare we say that? Who are we to judge? (See About Us for the answer to that!)
A: It starts and ends with your theology. In particular, where do you stand regarding the millennium? Are you pre-millennial, a-millennial or post-millenial? (Not your rapture/ trib view…) 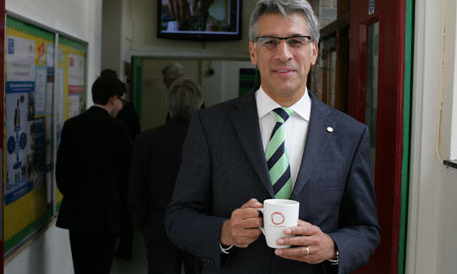 Many seminaries and Bible colleges no longer teach the literalist pre-millennial Biblical view – which therefore leaves the student with another Gospel – another Jesus and another Spirit. (See the Sound the Alarm teachings for more detail). Because, if your theology isn’t sound at the foundation – it certainly won’t be any better further down the road.

The prevailing thought of the day is a-millenialism – which leads to a dominionist, kingdom-now world view. To have this view, you can’t be reading the Bible literally and at the end of the day, you’re making it mean whatever you want it to mean. There are no absolutes. What security can you have in that?

The Bible is very clear that in the latter days, people will surround themselves with teachers who will tickle their ears and say what they want to hear.

Christians we once knew as sound and who swore they would never deviate from the narrow path, have swallowed The Lie they have been fed…hook, line and sinker. This lie urges them to STOP listening to those so called ‘doom mongers’ like us. They say “God is a good God, all paths will eventually lead to Him, there is no way Hell is real.” On and on and on and on.
Big fat lies – with a tiny sprinkling of the truth throughout – just enough to make it sound vaguely Biblical or religious in some way.

So called intelligent people whose faith is built on sinking sand, and who follow every wind of doctrine believe this stuff. Those whose feet are not planted on the solid rock.
Is that you? Perhaps you don’t know your Bible as well as you should. You have not been taught by a sound and Godly teacher – who may well have not been taught well in turn? IT IS NOT TOO LATE.

So, where does Steve Chalke come into this?

I am a private person. Like many others, I had a murky past before coming to The Lord. I had homosexual friends. I was pretty familiar with the scene. I know better than many what leads to homosexuality – and I know beyond any shadow of a doubt that God DOES set people free from it. It is almost against the law to imply that now – so what do we mean?

There is no doubt physiologically that homosexuality is an aberration. It is not how we were created – but it is how we have evolved – in a societal way! (That’s for another discussion!). Like most right thinking people, we abhor discrimination of any kind. Most of the homosexuals I have met over the course of my life say they would rather they weren’t that way inclined – even those in happy relationships.

So, just my parents brought me up to love everybody regardless of their colour, creed, religion or whatever, so should we bring up our children. That is the normal run of things in our opinion. Teach decency, kindness and good manners. Very old fashioned concepts nowadays.

HOWEVER – God’s Word is very clear as to what is acceptable to Him – He sets out the boundaries of our habitations. He never changes, He’s the same. Yesterday, today and forever. What peace and security there is in that. He is constant. Trustworthy. Immutable.

THEREFORE, teaching that homosexuality is an equal state to that declared originally in both God’s and man’s law, is nothing short of ridiculous. Changing His Word to fit the mores of the day. If we can do that for one subject, we can do it for anything else.

We are to love everybody with God’s love. No matter the sin. But we CANNOT change His Word to make it say the easy option. Either He is God – or He is not. The Bible is His Word – or it is not (see Cup of Trembling – countdown to Armageddon for proofs…).

Steve Chalke has clearly sold out. He is no longer a Bible believing Christian. He is on a rocky path. The sentiment or emotion of what he says is understandable – but the words he speaks are false.

::If you are not sure or disagree with what we write here, please drop us an email and one of our pastors will be happy to come alongside and explain::

Remember that the Bible clearly warns that in the latter days, the lie would be exchanged for truth. How else can the antichrist prepare his kingdom?
Remember also, Satan is the god of this world. He knows his time is short as we draw to the conclusion of the age. His greatest work is to be sure you no longer believe that.  He whispers that you are too sophisticated – too well educated…

Yet again, we throw out another important part of the Bible…So, what next? PLEASE WAKE UP and strengthen what remains and is about to die. His arm is not so short that it cannot save. But you have to move NOW!