Since the dawn of mankind, apocalyptic ‘end time’ or ‘end of the world’ visions and prophecies have been recorded by ancient civilisations, from the Sumerians to the Maya.  The Daniel Project is a documentary like no other – described as the best film ever made about the subject of Bible prophecy.
So, is it science fiction or observable fact?

With a background in investigative research, Deborah Forrest-Menelaws, head of production at the Scottish film production company, Studio Scotland,
produced this documentary which has been broadcast globally on various networks and has caught the attention of peoples from around the world.

This 90 minute feature length investigative documentary presents an overview of a complex subject and has been hailed by many as the “best Biblical prophecy film made”. It is claimed that individuals from antiquity recorded warnings from visitors outside of our time domain, warnings that only the final generation would understand. Many are convinced there is overwhelming evidence supporting the belief that this final generation is living now!

Is prophecy after prophecy actually unfolding before our eyes? Whilst this short overview cannot do justice to what is a complex subject, it is up to the viewer, whether or not to investigate matters further.

Join presenter Jeremy Hitchen on a journey that may well change your whole world view. 90 mins. 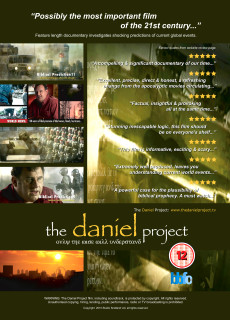 The NTSC version for the USA, Canada and Japan has English and S.American (Hispanic Spanish and Brazilian Portuguese) subtitles which can also be played in many European DVD players.

There are no reviews yet.

Only logged in customers who have purchased this product may leave a review.